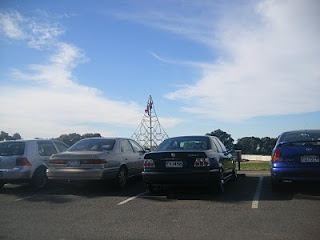 Cars, climbs and crimes. Note, none of the cars pictured were or have been involved in any crimes - as far as I know!
The last couple of weeks have been very interesting for me: by turns, as bad as being stuck in a porta loo at a rock concert in a heat wave, and as good as getting the goodliest visit from the good fairy to tell me I am as good as goody goodness gets.

I went to  hear the top bods of Penguin and Random House NZ talking about the dire state of the publishing industry.

Books are not getting published which would have several years ago. Commercial is winning over literary. Memoir cookbooks are top sellers - really - did you know that?

The e-book is trying to take over the world and, guess what, the publishers want it to!

They didn't speak about the kind of novel I'm working on so I ambled over to Mr Penguin, at the end of the session, and asked him for myself. I asked him what the market's like for my novel - pretty good - and showed him my pitch - two sentences - he liked them enough to give me the name of an agent. Cool, except that I sent my sample chapters off and said agent didn't like them!

I scuffed my heels for an hour - ah, woe is me - and then got to it. I cut 10,000 words - yes, you read that right, four zeros - and I ripped out the structure and thought outside the box. My novel was a triptych - it's not anymore! My sample reader (not husband) emailed back "brilliant" (and he is one mean critic), and I'm polishing sentences again and gearing up for the next phase. I wish I could work on it all day every day.

However, I have family stuffage! Yesterday's stuff involved giving someone a lift to and from the dentist. Said passenger was heavily sedated. I only realised how heavily when a car reversed at speed towards us and said passenger hardly flinched! I, on the other hand, whacked my horn on and nipped out of the line of impact only to see a woman chasing the reversing car, shouting " Stop them! They've stolen my....". I shouted out of my door "Get them!" and zipped around to the next exit - where I thought they would appear - only they had zoomed off.

Ironically, the police station is just across the road from where all this happened. I went in and said there was a robbery underway and had no sooner said this when a chap came into the station - having heard a prolonged beeping of car horn (that was me) and thinking he should take the number and mark of the car speeding from the car park!

Several minutes later the police had caught them! How cool is that? My work here is done, I said, and went home rather pleased with myself.

To summarise: I blew my chance with the agent by getting carried away with myself and not giving myself enough distance from my novel to be absolutely cut throat critical about it - won't be doing that again - but I did do a good deed and was rewarded, if not with an agent/book deal, at least with the knowledge that I am one formidable lady and kick ass baddie catcher!
Posted by Rachel Fenton at 12:30 AM 32 comments: 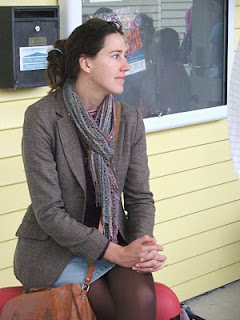 Photograph courtesy of The McGowan.

You may be wondering if you blinked or, shock horror, if my last post was all a dream.

No fear - your comments are saved and much valued.

On shore in the dark -

between us; ocean flicks

lift it to my ear; it sighs

And there is sand between my toes.

I have run away

and his car set tongues wagging

but he saved your life

though all you can report is that you saved his.

You knew it was a heart attack

when his plumb line went flat

but your husband wasn't convinced

it was necessary to remove the plumber's

trousers to give him mouth to mouth.
Posted by Rachel Fenton at 3:56 PM 22 comments: