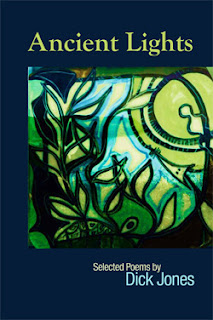 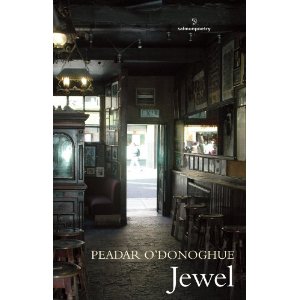 I interviewed both authors mentioned below when their debut poetry collections were first published earlier this year. I wrote this review around the same time, but despite my luck with getting my own individual pieces published I have had less luck placing reviews, so I'm posting this double act here for your appreciation.

Dick Jones’ debut is titled Ancient Lights but it is the sense of sound that transfixes us in the first poem of the collection ‘Stille Nacht’. ‘On the night/ that I was born/ the bells rang out’ chimes the first stanza, comparing worship to carolling ‘In Auschwitz-Birkenau’ where ‘the story goes,/ the death’s-head guards/ sang, “Stille nacht,/ heilige nacht”’, and it is sound that transports us through the title poem and beyond.
‘Ancient Lights’ begins self-referentially, knowingly: ‘Banded light, I should remember first’ before exploding into synaesthesia. Each stanza culminates with song so that ‘The conductor haunted/ the stairs in black. We crooned’ fills us with the notion of song being history’s ghost; music therefore, Jones urges us to listen, is time’s time-traveller, a way in to the historical events through what was the primary escapism of those times. We listeners travel chronologically as linear voyeurs ‘on a dim swell of voices’ to ‘a house’ as if of creation, but here Jones reveals his conceit, ‘that’s there already,’ and is ‘free of pain/ and ghosts,’ ending inarguably with ‘fruit/ that falls and germinates/ at random when/ and where it will’, the last line tapering to a single apple drop; the sound of a full stop.
‘And time and place/ conspired:’ in ‘Mr Moore’s Wall-Clock’ evoking for this reader the school rhymes of Yorkshire and of Henry Clay Work’s ‘My Grandfather’s Clock’ and Charles Kingsley’s ‘The Old, Old Song’ (though one must wonder, given the poet’s musical background, if it wasn’t Donovan’s ‘When All the World is Young’ playing through his mind when he wrote it) with such lines as ‘And the world was one green hill, the sky a net’, and ‘Time/ was a circle dance, two hands in rhyme’. The loved face in Jones’ poetry is recognition, of memory, of walls blown down, and of new beginnings built from the ruins. Each stanza pushes forward the narrative like clock workings ‘into shadow, from my midday to Mr Moore’s midnight.’
So seamlessly Jones transports us with his watchmaker’s eye from the intricate brass gears to a ‘First Eclipse’, it is easy to run full pelt through this collection with no more impediment than a child’s desire to empty out the toy box, only his language calls us to pause and marvel. The overarching themes of Ancient Lights are not new but they are brought to the reader with fresh observations and a deft touch leaving one in no doubt Dick Jones is a new talent, one only wonders why it took so long to bring him to print.
Born in war – a beginning from ruins – it is fitting Jones concludes on the moon. ‘I am elected watchman. It’s my lot’ Jones starts then turns the words with a thread of irony easy to miss but difficult not to savour: ‘[…] while man takes giant steps below’. Jones’ collection crescendos ‘like a choir triumphant’ with its song lingering long after the event has ended.
‘The Old, Old Song’ sounds again in the epigraph of Peadar O’ Donoghue’s debut collection. ‘I was never a diamond,’ he explicates, ‘not even a rough one, I can’t polish pearls of wisdom,/ but this is my jewel.’ And Jewel, the collection’s title, is much the finest metaphor one could choose to describe O’ Donoghue’s poems; each one gives the sense of its having been hoarded away for years, polished carefully before being allowed to shine. But there’s the irony for the subject matter of these poems is not what one would wish to show off ordinarily. In the title poem a drunk’s thoughts are brandished defiantly as a whore’s knickers as he personifies the river Liffey: ‘she calls to me in clamshells of desire.’ In this way the poem builds, throwing together imagery as at odds as pissing and consumption, seemingly with all the grace of a chip shop server, to justify the speaker’s ‘relief and satisfaction in equal measure.’ Far from being bawdy the poem is a tour de force in bathos in spite of its vaudeville guise.
Though seemingly pained to acknowledge it, O’ Donoghue has literary authority. In ‘Pictures and Postcards’ we glimpse: ‘Mountains to mist, Beckett to boxer to blonde’, the allusion dissolving like a cloud to the concrete of the fighter and further to the artifice of ‘blonde’. There is reserve here that comes to play as control, there is skill but it is humble; the poems in Jewel down-play themselves, in doing so they demonstrate un-showy brilliance. O’ Donoghue applies comic book humour to take cliché after cliché and crush them Superman-like to reveal the diamond inside. ‘“Stay a while” they seem to say. “Drink your coffee,/ compile this list for lesser days”’ which is surely what O’ Donoghue has been doing with this collection.
Jewel speaks of an Everyman man who has lived a place, caught in its traditions until they have become him. There’s a symbiosis here lending to a Sean O’ Casey poignancy and politics. In ‘This is a Controlled Poem’ O’ Donoghue lets slip his buffoonish masque to cane A S J Tessimond-like ‘the voice of reason’. ‘This poem’ is a rebellion such as only those who have been silenced know. ‘This poem is […]/ a neatly pressed shirt for the office on Monday.’ Duty here mirrors religious observance and ritual but in ‘The Birth of a Nation’ any spiritual intervention is dismissed. ‘It wasn’t a miracle,/ most things are born out of poverty,’ like Christ. We are reminded of this in ‘This Christmas We’. ‘Stretch the fabric of life,’ it urges, boldly, then tears its bravado to scraps, ‘reduce,/ re-use, recycle’ chanted like a drinking song.
O’ Donoghue has kept his poems in his shirt pocket it seems for half a lifetime, gems cut clean from the heart; the words of a shining talent don’t need the allusion to let you know they sparkle, they simply need to be read.
Posted by Rachel Fenton at 7:53 PM 14 comments: