Thrilled (or should that be frilled?) to have my review of Andrea Quinlan's debut poetry chapbook, We Speak Girl, in the latest issue of Melusine.

In other news, I made the shortlist of the "Fish Poetry Prize" - judged by Paul Durcan - after getting two poems on the longlist.
Posted by Rachel Fenton at 1:09 AM 7 comments:

Had a smashing time at the workshop with Jackie Kay exploring Poetry and Place.

She gave us three exercises to jot down instructions for - recipes for poems - that we could take away with us and work on in our own time, as well as talking us through two of them during the session.

Between the exercises, she read some of her own poems. One made me cry, but I don't think anyone noticed.


Jackie said that finding the trigger for a poem is like finding a tiny key - or something similar. I don't actually recall her exact words because I was writing:

which I thought was very funny as everyone appeared to be looking for a tiny key in their notebooks whilst writing (I suppose you had to be there).

Because it was a large group we didn't get time to introduce ourselves, so I have no idea who most of my fellow poets were. But I did get to read out the poem resulting from the final exercise. Jackie said I had approached the piece from an unusual angle with original imagery and that it was very sensual..and other things, but I was already twelve feet in the air on a trapeze surrounded by parrots and cherubs playing jazz on petunia trumpets.


(Afterwards, as I waited in the nearby department store for my husband and son to meet me, I must have been visibly swooning, still, as a store assistant asked me if I was alright.

For which the assistant apologised and offered his condolences.)

My friend Lori Tiron-Pandit has written a book and I got first dibs to interview her about it.

Thank you, and welcome to the blog, Lori.
Your book, Spell of Blindness, is the story of Ana, a woman whose spiritual journey is told retrospectively through her journal entries. What inspired you to write this story?

It is a story that had been growing in my head for a very long time. I always knew that when I start writing my first book, that will be it. When I finally started writing it a few years ago (before my daughter, who is now seven, was born) it took a different turn and then another, and it turned into a story I hadn’t really envisioned from the start, but which had the essence of my initial idea. But the main character and her journey in search of love and spirituality remained true to my original thought.

I love the atmosphere of the book, it's very dreamy, but the story is grounded, I think, by the beautiful descriptions of Romania. I've never been there but feel like I have. Tell me a little about the location and why the book is set in Romania.

I belong to the school of thought that says it is best to write about what you know. I grew up in Romania, I was molded by that land and the memory of those places will always move me, a feeling that I am trying to share with my readers. I am especially fond of Bucharest, a beautiful and ugly, dear and hated city, like all big cities, and the landscapes surrounding the villages where my grandparents lived and my parents grew up, somewhere in the southern part of Moldavia, where I used to spend all my summer vacations.

Talk to me about themes. One of the first things I commented to you when I read your novel was how you write about the cold - it's practically a character in its own right in the book. Is the cold a metaphor in the book, or is it always cold in Romania?

I was actually surprised when I realized how cold it was everywhere in the book. That was completely unintentional and it came from the main character’s sense of struggle, unsettlement, pain and discomfort in her own skin. It’s one of those things that although unplanned are essential to understanding the inner life of the character.

Interiors are another theme that can be traced throughout the entire novel. The houses in which the characters live are representative of their states of mind and are important elements in decoding these characters.

The diary fragments are just that; some characters appear then disappear without much introduction, though Anna really anchors them in the narrative. How does the fragmentation fit in with your vision for the novel? Are you a fan of epistolary novels in general?

I don’t feel compelled to follow a linear development of a story when I write. Linearity feels too cerebral and unnatural to me. I think that real stories are always made up of fragments that we put together over time to create an image of someone’s life and experiences. I like the idea of disjoint pieces that don’t perfectly fit together but need the audience, the readers in this case, to glue them together and fill in the small spaces that remain uncovered with material brought from their own similar experiences.

Tell me about your use of allegory. Ana's friends represent different spiritual paths and choices, don't they? Could you talk a little bit about Amon?

Ana’s closest friends represent different facets of the same journey. In my construct of “blindness,” Ana stands in for the concept of “love is blind,” Ella for “fate is blind” and Laura for “faith is blind.” It feels like they are all struggling through darkness, but I tried to envision a way out in the end.

Amon is the ideal of love that Ana searches for. He represents the surrealistic part of the novel, which is important for conveying the whole sense of an inner world that is rich, magical and disturbing at times. Spell of Blindness happens in Ana’s head, and our minds are the most complex, treacherous, and often untrustworthy parts of us.  Amon might be a creation of Ana’s mind, but he might as well be a real, breathing human being. We don’t exactly get a straight answer in the book, but there are many hints as to what the truth might be.

There are many women in your novel - all different, all vivid. You write wonderfully of friendship. How do you think Spell of Blindness fits into the literary canon of Romania? Are strong women a feature of Romanian fiction?

I have been rather disconnected from the current literary world in Romania, since I moved to US almost ten years now. One of the reasons I wrote the book in English was that I wanted it to be perceived as a rendition of universal struggles of women, not particularly of Romanian women. I can say that although there are many women writers of a new generation being published now in Romania, classic Romanian literature, as well as the majority of what is considered “high” literature today is represented by men writers. I do not see women, even strong ones, if they are written by men as significant in bringing to life the universe of womanhood. I think that Romanian women writers are trying as hard over there as we are trying over here to break all barriers and bring to light a literature of our own.

What inspires you to write?

Well, this is a question that I have to ask myself daily when I sit in front of my computer to write. I prefer to look at inspiration as a mystery. That is my approach and I know it is not shared by everyone. Each writer is different. I know I have a message (to shed light on women’s lives in the social context of our times) and from there it is all magic. Magic is not a very productive approach to writing, but somehow it lends itself to use as a reliable tool. I summon the magic every morning and most times it shows up to help me.

Do you have plans for another novel/what are you working on now?

I am working on a second book right now. It is different from Spell of Blindness and yet very similar. I think the readers will find an already known universe that will be populated by different characters with different visions. It tells the story of a community of women that preserves old ways of life and of faith with respect for women’s values and peaceful co-living. It’s a story about women who are healers of the mind, body and soul, who have faith in who they are, and who connect in nourishing their powers to enhance them and use them to help themselves and help others. I hope to be able to get it ready for publication by the end of this year.

Your new project sounds fascinating, Lori, and I wish you lots of luck with it. 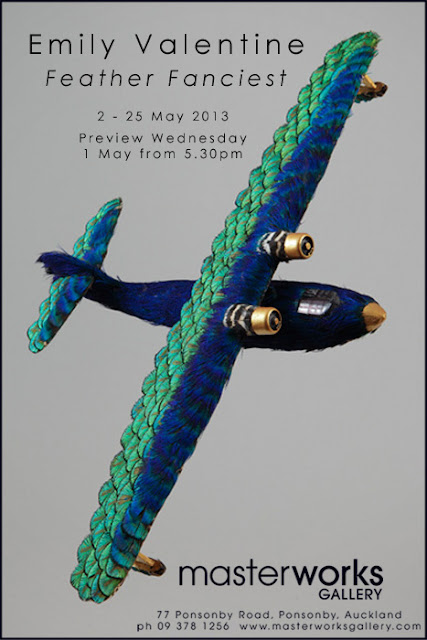 I spent half an hour this morning at the Masterworks Gallery where I met the artist Emily Valentine whose work is currently exhibited there.

Emily's sculpture "Mynah Messiah" was the inspiration for my poem of the same name, in issue #30 of JAAM. I gave her my copy.

Typically, I was a bundle of nerves and barely got a coherent word out, but Emily was very lovely and told me all about her inspiration and some of the process behind her work. As she smoothed some of the feathers on the pieces suspended from the ceiling with wires, I asked if people often got the urge to touch her work (I was fighting it). She said these ruffles were from people bumping into the work.

We talked about each piece in the exhibition. She told me "Air Gull" was inspired by the "Miracle on the Hudson", and lots of other stuff.

On my way out, I bumped my head on "Peacoctalina".