As kings or serfs 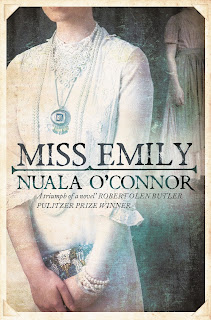 Ms Rae Has a Visitor!
Thanks be – it’s Nuala O’Connor on the blog to talk about her latest novel, MissEmily.


The Dickinson household is saved from domestic chaos with the arrival of Ada Concannon, a “neat little Irish person, fresh off the boat”. Amherst in the 1800s is a pastoral environment for the homesick young maid who finds in the gifted middle child, Emily, a fellow feeling; they were born on the same day, they share a sense of mischief and a love of baking. Emily’s fledgling poetry and passion for words is her true vocation but as it begins to dominate her mind, she retreats from the small world around her and enters her infamous white phase. The friendship that forms between the two women is tested when Ada’s personal safety and reputation is violated and Emily finds herself tasked with defending her maid against her own family and those she loves, with shocking consequences.

“Only this morning I dropped a spoon first and soon after a knife, so I knew a visitor would be calling before the day was out.” p33


They do say Ms Rae loves company, do they not?

Ms Rae:
“A Resonance of Emerald”
Miss Emily was my fond companion from first page to last. It’s presence in my hand was wont to set tongues wagging. I love that you gave equal voice to the characters of Emily Dickinson and Ada, her Irish maid, and I wanted to ask you – as a working-class woman myself – if you considered how important your novel is in that it portrays a strong working-class protagonist, if not on equal footing, at least in terms of equal significance to readers?

Ms Nuala:
Yes, it was important. The novel is as much about social division as about friendship. Can people across classes really be proper friends or is there always an imbalance? Ada is not a sorrowful immigrant – she is a strong, forward-looking young woman who delights in the adventure of leaving Ireland for America. It was important that she had equal footing with Emily Dickinson in the novel, so it is a dual narrative where the two women narrate alternate chapters.

Ms Rae:
“There’s a certain Slant of Light”
Ada is not the only working-class character – no token friendship here – as Emily’s confidante, sister-in-law Sue, a near constant in the real Emily’s life, also features prominently in Miss Emily. Real-life Susan was the daughter of a taverner, rising through the social ranks by virtue of his death and her marriage to Emily’s brother, Austin. Miss Emily captures the transformative essence of Dickinson’s poetry. And as with her poetry – what is often most notable is what is omitted from it – so much resides within a dash – so it is with details of Emily and Sue’s relationship.


“…as always with Sue, I bend to her desire. Her mind is occupied with Austin and with ironing out domestic rucks, which is as it should be. We drink our tea and listen to the clock tick and Baby Martha’s fossicking noises from her bassinette. If Sue cannot come to me in Spirit today, all I can do is endure it; there are days when she cools and retreats and this is one of them, I fear. We sit on, drink our tea, and the clock’s pendulum seems to become drowsy and ponderous, as if the air has grown fat. The ticking sounds sluggish to my ears, it goes slow, slow, slow, then, halt.” p136


Your portrayal of Sue is remarkably nuanced – she is adorer of and adored by Emily, but she is also snobbish, particularly towards Ada. I thought you captured the internal anguish a woman from Sue’s beginnings must have had in the presence of someone who would have reminded her how easily traversed the social ladder could be – how one might slip down its rungs as rapidly as one had climbed – and I wondered how much you consciously cultivated these nuances and how much of Sue’s character was evident from documentation, correspondence with Emily, and so forth? Susan is a triumph of characterisation. Could you talk a little about the research process, what went into the book?

Ms Nuala:
Sue is problematic in that a lot of our views on her (other than Emily’s) come from people with agendas, like her husband’s mistress and that woman’s daughter. She has been painted rather black, but Emily saw her as luminous and really appreciated everything about Sue – her cleverness, her social skills, her beauty. I took my portrait of her mostly from Emily and a little from the hearsay. With Emily and Ada both so good-natured, I needed the balance of semi-villains and so I made Austin and Sue those people. It felt slightly betraying but, in terms of fiction, it has to be done. Two Dickinson scholars are in the process of writing new biographies of Sue and I really hope they unearth more of the good things about her.

Ms Rae:
“The Heart asks Pleasure – first – ”
One of my favourite parts of the novel is when Miss Emily narrates of Ada’s feelings for Daniel Byrne as Ada tends to Emily’s dresses – her favourite being “a snowy cotton wrapper with mother-of-pearl buttons and a pocket” – I especially love the duality of the prose:


I court vicariously through Ada and Daniel Byrne; I watch their shy, sweet glances tossed like luck pennies back and forward in the kitchen. Sometimes a stray penny lands on me and I pocket it gratefully. p118


I fair marvel at the outward observation’s facilitating the reader’s insight into Miss Emily’s life and character. But I especially admire how you fashion not only the machinery of Emily’s poetry, her character and mind and words, but also the storehouse for them, such as her pockets. You marry metaphor and fact as perhaps only a poet could. An acclaimed poet yourself, where did your interest in this particular story spring?

Ms Nuala:
I loved Emily’s poetry at school – it appealed to my sense of teenage gothic gloom. We didn’t read her happy poems much! I heard a few years ago that Emily loved to bake, as I do, so I began to bake her recipes for Black Cake, Coconut Cake and gingerbread and I was thinking about Irish domestics and it all coalesced into a poem first and gradually a novel.

Ms Rae:
“The Soul selects her own Society”
Emily didn’t take to housework – or receiving visitors, unlike Sue – nor it seems did Ada, though she didn’t have much choice! “‘Hope’ is the thing with feathers –”. There’s a description of Ada dusting and another of her cajoling hens to lay, and of her plucking one (standing over it, not hung as was her mother’s preference) – nature domesticated is abundant in Miss Emily, described so beautifully by Emily and, surprisingly, Ada. Even when describing the view of her home town as the boat pulls her away, Ada says, “Dublin lies like a big dozy cow, not able to shake the sleep off herself.” In another section of the novel, Miss Emily explains to Ada about her name being a palindrome and I thought it a great analogy for reflection, for Emily and Ada being so alike but for their circumstances differing.


Emily: Ada, you are like a breath from Madagascar p45
Ada: I shrug but, truth be told, I am as pleased as a dog with two pockets. p47


Could you talk a little about the importance of nature to both Emily and Ada, and where your inspiration for Ada came from?

Ms Nuala:
Emily loved to bake, which is one type of housework, and she also loved all natural things – much of her oeuvre is about nature and/or uses images from the natural world. She was a devoted gardener, like her mother, and she studied botany at school. Ada grew up in Tigoora in west Dublin which is, essentially, the Liffey Valley, so she was immersed in rivers, trees and flowers, much as Emily was.


I needed to invent a maid to give me fictional freedom as I was already working with the facts of the Dickinson lives. However I made Ada a cousin of one of the Dickinsons’ real Irish maids, Maggie Maher, who was a Tipperary native. In that way Ada is still connected firmly to reality and history.

Ms Rae:
“Fame is a bee.”
Considering how prolific Dickinson was, little of her work was published in her lifetime and, it seems, even her own family knew not of the volume she had written until after her death. And it was much later still when her poems were published as they had been written in her hand. Contrast this with what would be recorded of a maid, however, and the picture for the majority of women of the period in which Emily lived appears like a faded Daguerreotype. You are brilliant at recording lives and moments of women’s existences that would otherwise go unwritten. What would you like your legacy to be?
Sue lifted her face to me. “I really liked the poem you sent to me yesterday, Emily. There is such joy in it. I could not say I understood it all, but the image of the bee was rather beautiful. You find poetry everywhere, my dear.”

Ms Nuala:
Women are horribly absent from our historical education, as we know. Today they are also still not hugely visible in many professions, including the writing world. Like many historical fiction writers who take women as their main characters (Emma Donoghue, for example), I want to bring women in history into the light. Social, domestic and material history are much more interesting to me than, say, warfare. I find the term ‘Herstory’ a bit clunky but maybe it’s one to embrace? So, in terms of legacy, I want to add to the herstoriness of history, rewrite the script and look at women mostly, but also look at people as people first, as opposed to as kings or serfs. 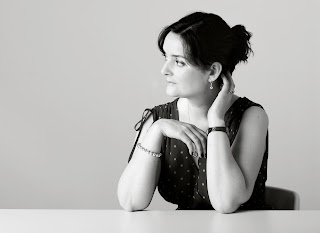 
Nuala O'Connor was born in Dublin, Ireland, she lives in East Galway. Already well-known under the name Nuala Ní Chonchúir, she has published four short story collections, the most recent Mother America appeared from New Island in 2012. Her third poetry collection The Juno Charm was published by Salmon Poetry in 2011 and Nuala’s critically acclaimed second novel The Closet of Savage Mementos appeared April 2014, also from New Island; it was shortlisted for the Kerry Irish Novel of the Year Award 2015. In summer 2015, Penguin USA, Penguin Canada and Sandstone (UK) publish Nuala’s third novel, Miss Emily, about the poet Emily Dickinson and her Irish maid. www.nualanoconnor.com

Catch up with previous stops on the Miss Emily blog tour here, here & here.
Read reviews here & here.
And find out about the research process here.
Some previous interviews with Nuala can be read here & here.