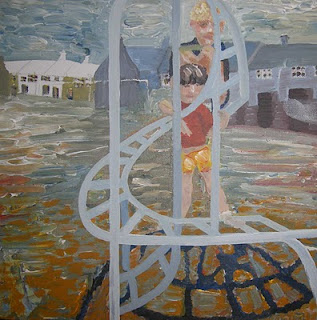 Not quite there yet.
Two lovely snippets of news for you:

One of my stories made it to the longlist of the Sean O'Faolain Prize - Congratulations to overall winner Nikita Nelin and to all the other entrants, and huge thanks to Tania Hershman for posting the list.

Secondly, Mark Reep has done an awesome job of setting up the Ramshackle Review and I was lucky enough to have a poem chosen for the first issue. It's a very cool venue and I'm looking forward to seeing how it develops as Mark is an especially talented artist and writer who blogs here.
Posted by Rachel Fenton at 5:56 PM 40 comments: 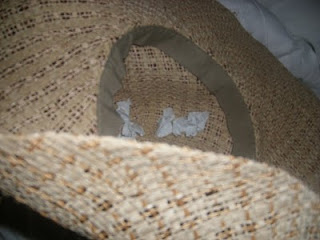 Titus - the brainiest most talented poet terrier EVER -  sent me a meme and, although I don't usually do these, I thought that seeing as I was only going to post the winner of the graphic conversation I would pad it out a little and do this, too. Thanks Titus!


1. Why did you start blogging?

It was a dark night. I sat alone in the diner on the corner of fifth and fourth and a quarter eating the dried up crust of a marmite sandwich and stared out of the window. It was raining hard. If it had been raining any harder the rain would have bounced back up and it wouldn't have been wet. But it was wet. Not just any wet: it was the wettest wet I'd ever known. It was Auckland. I wanted to get the rain out of my head and sitting on my ear wasn't working, I decided to try something. First there was the bungee jumping but that made the world spin for twenty four continuous hours, not even a five minute break, and then there was the scoot boarding (as my daughter calls it) but my street cred was falling fast; I needed to do something, something big, and I needed it to be soon...dun dun duuuuun!

What actually happened was I wanted to see if I could get some stuff published and I thought blogging would be a good way to meet other bloggers and put a little pressure on me. That's the official reason. The actual reason is that I was researching for a novel - aaaaargh - the truth is out!


2. If you could travel anywhere in the world with no restriction of costs, where would it be and why?

America - all of it, until I found what I was looking for - because Edward Norton lives there!

3. Did you have a teacher in school that had a great influence on your life? If so, what?

I had three: one told me I was a poor working class girl and as such should be satisfied to work in a local supermarket. I have been trying to grow a bigger moustache than her ever since.

The second got me work experience at the local rag and had a belly like Father Christmas and every English lesson I lived in hopeful fear that a button would ping off his shirt and knock my nemesis in the head.

The third tried, with much patience and perseverance, to teach me French and told me to send my stories to magazines.

4. If you could spend the day with a famous person, who would it be, and what would you do?

Edward Norton and I would discuss ways to end world poverty over a shared sandwich.

I am SO over toilet paper - it is so last season. Scootching along the grass for me every time now. And the winner is: R.F. It's me! Kidding! Rachel Fox - you lucky blogger!

6. Name one thing in your life that you would do over if possible.

Is this a rude question?

Bubbles the hamster weed on my arm when I was twelve and I didn't tell then but I am now. So there! Oh, ABOUT, not ON....hmn...there is a spider, outside my kitchen window, whom I have named Roberta the Bruce. RtB and I have a deal: she stays put and I don't have to clean the windows - but she isn't allowed inside!

8. Do you live in a small town or a large town?

I live in a city within a city which is the size of a town by UK standards within a city which feels like a town. I live in North Shore City - it is a real city, honest guvnor, but it is within the better known city of Auckland and each has its own mayor and they don't really get along (if you believe the report of one attendee of the most recent meeting) or they really want to hug a lot (if you believe another report of the same recent meeting).

I am supposed to pass this on - like chicken herpes - but you may have had this already. If not, and you want it - come and get it!

And for those of you who just scrolled to the end for the winner - hahahahahahaha - go back up and look again :) I'm a scamp and a half!
Posted by Rachel Fenton at 4:08 AM 25 comments: 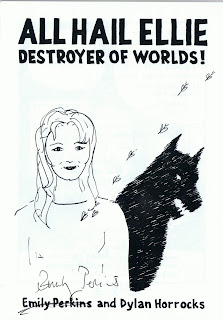 Signed by the lovely Emily Perkins and the handsome and jovial Dylan Horrocks..... 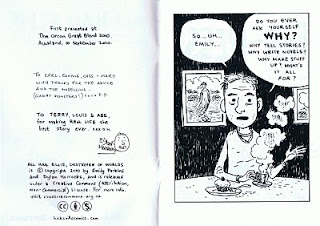 I have a copy of their collaborative graphic conversation - on why Emily writes fiction and Dylan draws it - to give away....

....all you have to do is be your usual startlingly witty selves and leave me a jolly comment and I'll pop your graphic/literary representations (erm, names on a bit of paper) in a hat and announce the lucky winner....

....when I have ten comments (not including my replies!) 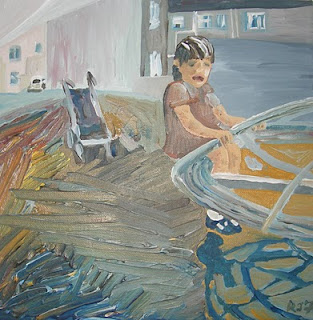 Still working on this but I don't mind you seeing my mistakes; I'm still learning.

My weekend was not as productive as I had hoped, not helped by the fact that I was feeling guilty for sending off HOM with the kids to the playground then discovering it was Father's day! Why can't the world decide on one day? It was June in the UK, which bright spark moved it to September? And the internet was playing up. I didn't get any new stories down, as intended, but I did manage to work some more on a few existing pieces as well as my screenplay.

The screenplay is now up to 115 minutes which means, it being a comedy, I have only another five pages to write. Five pages? What the hick!? So how come I am only up to page 146 of the 267 page novel I'm adapting?
I predict a lot of editing. Note to self, adapting = shrinking.

I am now making more harsh critical choices as I write. It's been an eye opener. And I am taking consolation in the knowledge that although I cannot get across all of my novel with the limitations of the time frame, I will still have the novel; the screenplay doesn't erase the novel. They are different and that's what I'm learning to love about the screenwriting experience. Some novelists who have signed over the rights of their books to film agencies lament that the film doesn't stay true to their vision. Well, I am in charge of my vision, so although I am changing elements which simply do not transfer to film, I am still deciding how those elements should be presented. For now. Which brings me on to my next point.

Film is collaborative. I love that about it. It excites me. With the input of others my story can be even better than I could have imagined. How cool would that be? What I lose in page points I acquire in the beauty of cinematography. However, there is also the distinct possibility that, even if I were to be lucky enough to sell my screenplay once finished, it might never get made. This happens all the time. Being good enough and getting nowhere is not the privilege of the novelist/short story writer. It goes right across the board. But what can you do? All rides and no fun makes for an unhappy playground but I simply must write on.
Posted by Rachel Fenton at 1:41 AM 16 comments:

So far I have read internet news for two hours, eaten chocolate and cereal and had five cups of tea! I am expanding my interests if not my creative output!

I have purposefully left my current reading material in the family vehicle which has now departed for the library/mall/ice rink with my off-sprogs.

I have a screenplay to finish and some competition standard stories to write - the day is but an infant...I have an idea about an ant in a thimble....it has to have chocolate in there....and Edward Norton....it's a big thimble....
Posted by Rachel Fenton at 3:26 PM 29 comments:

Just wanted to send out well wishes to all in Christchurch this morning.
Posted by Rachel Fenton at 2:25 PM 15 comments: