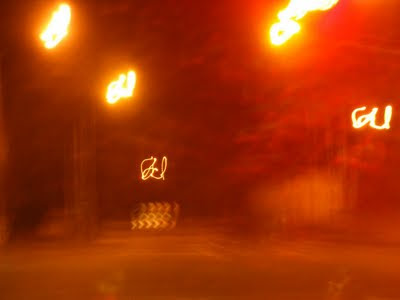 This is a shot of a Hell's Pizza sign, taken whilst driving by one night in November 2007. I am very fond of taking photographs this way.
"The narrator of Afterlife looks back to the summer of 1976, when the course of his life was decided by a violent tragedy, prefigured here in the destruction of a manuscript. He's temperamentally unable to separate the enduring sense of personal loss from his continuing anxieties about the meaning and authority of literature. Perhaps his pessimism will prove to be well founded. There can be few writers who do not at some level suspect that it is entirely possible that all the literature they most value will be discarded in a process of cultural change so encompassing that its exponents and opponents alike can have only a limited grasp of its possible consequences. The automatic remote erasure of electronic texts of Orwell's Animal Farm and 1984 undertaken recently by Amazon/Kindle (legally and for legal reasons) - to the fury of readers who thought they'd bought the material in question - can't help but seem richly, if parodically, suggestive of what may await us."

Sean O'Brien: if only you had enthused me as much with your lecture on William Blake! You're a devil of a poet though - I wonder what your novel's like?
Posted by Rachel Fenton at 4:32 PM

hi rachel - i too take pictures on the fly - from bikes, cars, evening shots in which the light sings into curls and arabesques.
the story of the remote destruction of e-texts by amazon is new to me. oh boy!! have a peaceful day. steven

It does sound very intriguing, doesn't it?

Steven, it was one of your pictures which reminded me I have so many pics of my own! Thank you! The effects are wonderful - otherworldly...and though this isn't a good example of the wonderful imagery that can be achieved this way it suited the devilment of my posting!

Yes, Lori, I only hope his prose isn't as dry as his reading voice! But he certainly is an extremely talented poet. Thanks for popping in!

If we do end up in a world where wireless control over our e-books means we are no longer free to read what we will, then real books will become tools of defiance and liberty. If they aren't already.

Publishers already make choices about what we read, by deciding what gets published. I am horrified (ok so that's dramatic), concerned that we might also be dictated to about what we can read of the what is available to read. And there's a definite ownership issue here. I own my books at least!

That said, I do see the appeal and benefits of the K...nope, can't bring myself to type it again! :)

Thanks for the mention on your blog! And I like the little devils!