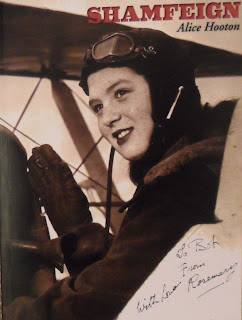 Excuse my wonky photography - the typeset on the actual book is not skewed as it appears here!
Saturday night had me at Browns Bay Library for the launch of Eye Street Poet Alice Hooton's debut poetry collection Shamfeign.
Having a bludgeon of a bout of anaemia and the kids home all weekend meant I only had time to read a few of the poems myself, so more about them later, but so far I would describe hearing Alice read several and dipping in myself like having my brain taken back in time and stuck in the head of someone reminiscing over an old photo album, flicking the pages familiarly and quickly before me, pausing here and there on particularly fond recollections. Mostly I was struck by their brevity: succinct but with emotion and gravity, and a wry, quiet wit. The excerpt on the jacket, from Strangers, could also describe the poems themselves:
today I paint a picture
of islands
a clipped blue sea
jostling windsurfers in the bay
a ragbag of hometalk
lest they forget
(Copyright Alice Hooton 2011)
Originally from Ireland, Alice's poetry takes in immigrant tales of Ellis Island, WWII, and relatives at home and NZ. I have a signed copy for the first name out of a teapot ( I lost my hat - which isn't to say I recommend wearing a teapot for sun protection - a burn is a burn is a burn...). Drop a smiley :) in the comments if you want your name to mash (also known in non S. Yorks circles as brew).
Posted by Rachel Fenton at 1:26 AM

Sounds, and looks, fascinating. Put me in the mash!

Yikes to the anaemia. Making progress?

Yeah - I'm on the iron, now I know what's been making me so tired! Got to the point where getting out of bed was as much as I could be bothered with! Thought it was just mother of toddler syndrome! Sorry for blog sluggidity in the meantime.

I like brevity in poetry. In many things, now that I think about it. She sounds like my kind of poet.

I hope you're well. Hugs.

toss me in the swill alaine!! i love the cover! steven

Hey, Lori - you're in the pot. I'm not grumbling, will be fine in no time, if only to be done with the ironing! Ho hum...that was funnier in my head...x

There's a poem and a whole explanation/family connection to the pilot there from Alice, Steven. It's a fab cover and it evokes the mood to enter Alice's poetry perfectly. Consider yourself tossed!

Brevity and wit sounds like my kind of thing.

I so admire those who can write with such an economy of words and still speak volumes. It is a skill I possess in NO measure. :)

Everything has its place, Les - I like a bit of both. You're in the mashing.

Brevity in poetry does it for me, even if I don't always do it for brevity.

That collection has one tricksy title. Put me in the teapot, Hope I don't drown! N x

"...like having my brain taken back in time and stuck in the head of someone reminiscing over an old photo album..."

This sounds like my kind of thing. And hey, you have my address already;-)

Dave, I'm a little that way myself! You're in the pot!

Ah, well even the title has it's own explanation, Nu - which surprised me - I'm not sure I'm convinced!

I pop a teabag with a string in for you to hang on to!

Donna - my comment to you never appeared - only just noticed! You are in the pot my dear!

Thomas, you're the tea-cosy to the pot: it's a given you're in!

I've often sat listening to "a ragbag of hometalk/lest they forget" with people who've moved around the world. Spot on, isn't it?

I wonder who the female aviator is? It doesn't look like Johnson or Earhart to me. (Perhaps it's a photoshopped Hooton?)

Dominic, the pilot is Rosemary Kennedy Lennord and I believe she is related to the poet but the exact story eludes me this evening!

It is just so with the "ragbag of hometalk", yes, I like that line very much.

You're in the pot!