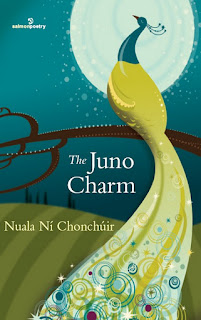 Now there are some poetry books which make me want to dash off and write something myself and then there's The Juno Charm which just awed me into submission; I literally could not write for several days after I read it because it's raw and real and surprisingly funny where I didn't expect to laugh ("Mannequin Envy") and moving where I was determined not to cry ("Sons"), and because it's what I've come to recognise as a synonym for superb writing: Nuala Ní Chonchúir. 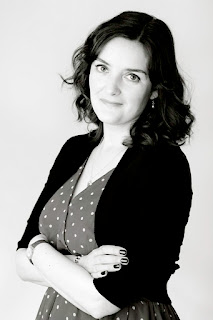 Born in Dublin in 1970, Nuala Ní Chonchúir lives in Galway county. Her début novel You(New Island, 2010) was called ‘a heart-warmer’ by The Irish Times and ‘a gem’ by The Irish Examiner. Her third short story collection Nude (Salt, 2009) was shortlisted for the UK’s Edge Hill Prize. Her second short story collection To The World of Men, Welcome has just been re-issued by Arlen House in an expanded paperback edition. The Juno Charm, her third full poetry collection, was launched in November in Dublin and Galway.

Welcome Nuala, thank you for coming to snowlikethought to talk about your latest poetry collection, The Juno Charm.


This collection made me think of a pioneer sea voyage, in so much as the moon winking from many of the poems, the varied geographies, and lonely land marks. It’s a work rich with places. For e.g., “Blue House, Magdalen Islands, Quebec”: I read it from the bottom line up and the image of a photograph, my grandma in front of a lighthouse in Canada, came to mind – when I got to it, the title was perfect, and I wondered, how important is travel to your writing?


Travel is really important to me as a writer. It’s the old thing – I’m a hermit because I’m a writer so travel is the big bonus – being invited places to read. But also travelling for the pure enjoyment of experiencing a new place. It jolts my writing to be somewhere new because my senses are on high alert. I love getting away, it keeps me interested in life. I’m just back from four days in Paris and just being there, walking different streets, was fantastic. I have a story in progress set there so I visited the street where one of the characters lives and discovered it has a church on it, which fits beautifully with the story. You don’t get that kind of information sitting at home or poking on the net.


I suppose, at this point, I should mention I read the whole collection in reverse to begin with, but on re-readings, including in the order it’s printed, I felt it had a rhythm which could not be broken, wherever I began reading from.
Journeys, of course, aren’t restricted to crossing continents; you have an ability to bring life, the act of creation, to fresh focus, and there’s a cyclical feel to this collection – again, much like the appearance, disappearance, now returning of the moon – this collection has a pulse. How much conscious thought goes into arranging the poems within the collection – is the effect of the whole something you planned for or even anticipated?


Yes, it takes me ages to piece the whole thing together. I wanted the book to have a narrative that was book-ended with positive poems. I also wanted a thematic flow, so the poems about birth are grouped, as are the poems about pregnancy loss, the ones about marriage, the New York ones are all together too etc. etc. I guess I want the reader to become involved in the story the poems are telling, which is my story over a number of years. I don’t consciously choose to write in themes but I’m possessed with different things at different times and that comes out in the writing.


Finally, I want to ask you about birds. There’s a lot of symbolism in your poems, and references, some obvious, some less so, but they only ever add more to a poem which has already reached satin gloved hands inside you and slipped them off; it’s almost like I had to pull the images, your poetry, back out of myself after the reading, so I wanted to ask you what your thoughts are on symbols, what they bring to your work, what’s your relationship to symbol?


Symbols are really important to me; I get obsessed by things from time to time - the moon, peacocks – and they start to feed into my writing. I’m a fan of Sylvia Plath (which will be obvious to anyone reading the book) and I love her use of the moon. I also love the Irish poet Matthew Sweeney’s moon cycle.


There are a lot of charms in the book – mostly to do with fertility and trying everything to get pregnant. I wouldn’t consider myself superstitious but when life is being hard on you, I guess it’s normal to look for signs and portents (in birds, let’s say) or to turn to any method possible to make things better, like carrying amulets.


And speaking of birds, a little birdie tells me you’re giving away a copy of The Juno Charm to one lucky blogger – readers, pop a mention in the comments if you’d like your name putting in the draw.


The Juno Charm is such a moving work, an utterly stunning achievement, Nuala, thanks so much for visiting New Zealand and talking about it.


Rachel, thanks a million for having me. Next week my virtual tour takes me to the lovely Tania Hershman in Bristol in the UK. http://titaniawrites.blogspot.com/
Posted by Rachel Fenton at 2:14 PM

Thank you both. I must temporarily kick myself, as I thought 'The Juno Charm' was a novel, which just shows how useful a blog tour can be. I loved Nuala's "Portrait of the Artist with a Red Car".
Thoughtful interview, interesting reflections and I'll definitely be getting the book.

But put in the draw anyway.

She is so talented. In the draw for me please.
x

Vanessa - I know you love the book, thanks for popping by for support.


JoAnne - I made a similar flummox with Nude! I seem to recall raving about poetry...no worries.

Lovely interview. It has its own rhythm in its questions and answers. An exposition of beautiful poetry. Thanks to you Rachel and Nuala

I really enjoyed your interview with Nuala, too, Órfhlaith - thank you.

This sounds wonderful, and it was good to read such an interesting interview, Rachel. Put my name in the hat too please!

Wow, all these comments!
Thanks everyone.
Special mega thanks to you, Rachel. Your sweet intro has me blushing :)
Nuala x

No thanks for me - it's a beautiful book, Nuala x

Great to read these impressions and thoughts on poetry from an Irish poet. Sounds like a wonderful book to read - draw me in!

Welcome, Kay - thanks - you're in, drawn and courted!

I really enjoyed reading this interview:)Its such a wonderful collection, and that really comes across:)

Thanks, Niamh - I really enjoyed reading your interview with Nuala, too :)

great interview and I love the idea of the sea voyage and also references to the moon, although that's not surprising with my name.

Thanks, but have a copy, just pop by my blog on the 23rd Dec.
Until then
parrish.

Thanks for this interview, Rachel and Nuala. It sounds like a beautiful book. How true that travel jolts writing into something new.

Thanks for reading, Helen - it is a superb book.

I agree - I've seen the change in your writing on your blog - travel agrees with you.

Shall I pop you in the hat?

Please put my name in the draw. It sounds like an engaging collection.

Pulling an image off of you that has entered from a poem - Wow, you really internalize what you read. I love the way these words made me feel. Nuala is lucky to be regarded with such wonder and import.

You're in the hat, Kass.

I do take every word to heart, live them, however briefly. Thank you for noticing.

I'll draw the winner on the seventeenth to give any latecomers a chance to pop their name in the hat.

Fine interview, looking forward to holding the book and diving in. Thanks.

Have been greatly enjoying the various stops on Nuala's tour. Each interview reveals something more about the collection and the process of creating it. Nice to get insight here about the grouping process.

Please pop my name in the hat.

I highly recommend losing yourself in it, Jim. Thank you, anad for reading.

Rachel, you are a hoot confessing that you read the Juno Charm back to front. We've never met, but I like you!
Put me in the hat, please. I'm Nuala's ghost writer...(in about 20 more years!)

mm - I like your creepy compliment about the ghost writer, so you're in the hat!

This book sounds really interesting. Every word Nuala says seems to go to a place that I recognize in some way. I know you have great admiration for her, Rachel, and I'm starting to see how it's indeed justified. The cover of the book is so great, also.I like it. Now I have to see if it's available in digital form for my devices. I don't seem to find the links easily from your post, but I'll find them.

It's a gorgeous collection, Lori - Nuala's poetry always feels very real to me, you know, the authenticity takes precedence over the desire for performance poetics, I think, and is the stronger for it.

I had forgotten about you being all high tech now!