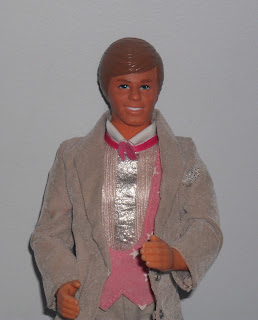 Readers, I’d like you all to take a bough and lift it for my guest Craig Stone to climb under and welcome him to snowlikethought for a walk in Auckland’s Albert Park. It’s a bit like Albert Square, only more concrete and with less rubbish. Mind your head, Craig, mwah and thanks so much for meeting me to talk about your novels, The Squirrel That Dreamt of Madness and Life Knocks.


If you had to condense each into its essence to stitch inside the pocket of a Ken doll’s tuxedo and pack it into a discarded bottle of Quink to send on a quill seeking voyage with squid appeal, how would you describe each novel in a sentence?


In order to answer this question with the accuracy it deserves I purchased a Ken doll and put him in a tuxedo. I didn’t actually purchase Ken; I already had plenty of Ken dolls and suits in my Barbie collection. (I just wanted to come across as cooler than I really am).


So, after a bit of light stitching followed by playing with Barbie and Ken:


Colossus Sosloss goes sane so leaves the insanity of his job that was making him sad and lives under a tree where he becomes accused of the horrible because of how he looks and where he sits.


Colossus Sosloss sits in a room looking at the tatters of his life and recalls how he got there. He tries to cut himself off from the world around him but Life, and eventually hope, Knocks.


For me, The Squirrel That Dreamt of Madness reads like a very light book – I flew with it until I hit that branch, mind your head again, oh, you’re much more low-hanger friendly than I am – however, your writing manages to encompass some pretty profound ideas. It’s funny and wistful and dark without losing its overriding sense of optimism but it is unexpectedly VAST, which isn’t to say it’s a big book, no, no, no, not at all, but it is epic mind food. Conversely, I found your prequel, Life Knocks, to be, for all it is punctuated with your unmistakeable humour, a bittersweet, grittier novel (not taking into consideration the ending). Was this a conscious decision? Or do you think reader’s views distort your authorial intention (did you have any? Or is it more a case of intentionality? What was the process for writing the novels and what do you think gives each story a very independent hue?


There was no planning anything. I never plan what I write. I quit my job in a moment of madness and had no choice but to live under a tree in a park in the real world. My only way out of the park was to write myself out of the hole I had put myself in.


With The Squirrel that Dreamt of Madness the quicker I finished it the quicker I could figure out how to escape living in a park. In that light it’s probably one of the quickest non-rubbish books ever written.


Life Knocks is grittier, more considered and less rushed because I wrote it in a temporary room where I had a bed, food and the occasional cup of tea.  For the first time I was able to actually look at what I was writing, then polish it afterwards.


The Squirrel that Dreamt of Madness is based on reality, Life Knocks is completely true. In that light there was no intention behind Squirrel only for me not to die in the real world, and in Life Knocks my intention was to write the brutal truth about the weight of life and love on young minds.


The books go together – The Squirrel that Dreamt of Madness is the prequel to Life Knocks but they also stand alone as separate books with separate voices because they are from different periods of my life.


Ooh, look how lovely the bandstand is; let’s take a pew to listen the cricket. Where? There, on that empty pop bottle.


I’ve mentioned a little about your humour which reminded me by turns of Steve Martin and Spike Milligan (I’m clearly up-to-date on the comedy scene). How much if what you write is off the bat; does it take much effort to write consistently funny lines or have you always been an entertaining cricketer (I didn’t want to mix my metaphors)? Incidentally, who are your comedy heroes?


Everything I write is off the bat. When I am writing something I can’t help but write whatever it is in a jovial way. My nature spills out onto the page.


Much comparison has been made between you and some other amazing writers which I imagine must be a huge compliment but I also wondered if this carries with it a little pressure for your next project?


Nope, no pressure. If there was any pressure on my life it could never be from the expectation of others. Pressure is like anger, they are both self manifested regardless of how we like to blame others for their creation and putting pressure on myself makes no sense. Whatever I write next will be what I write. Once it’s finished it’s not mine anymore. So any praise or derision any future books bring my way I won’t be emotionally connecting with; in that light whatever happens it’s all to be enjoyed.


That's a very philosophical answer, Craig, I like it. What is next for you and where can we read you?


Trying to avoid being homeless again whilst seeing where I come in the Dundee International Book Prize. Life Knocks has been shortlisted from hundreds and I am now in the final twelve. If I win I would be the youngest person to ever win the award and possibly the most homeless too. Winning that award would be validation my beliefs are right – that if we break the mould, if we say to hell with the consequences and walk into our fears then we come out the other side dressed like a chicken and dancing a jig internationally recognised as the way to go.

My books are available on Amazon, and The Squirrel that Dreamt of Madness is available on both Amazon for Kindle and in Paperback on Lulu. Give them a Google. People, probably smart ones that have read way more than I, have selected Life Knocks to be in the final 12 of the Dundee Book Prize – so Life Knocks is probably worth a read.


Thanks so much for visiting, Craig, I’ve thoroughly enjoyed our Withnailian wander, it’s been a perfect day; parks are much the most inspiring places. And best of luck with the work.


Thanks Rachel. Thank you for reading both my books, and for liking them and then for being so supportive and giving me this chance to chat. You are amazing. You were also extremely patient!

Good God, I needed that. Huge thanks to you both.

I'd not heard of this writer before. Sounds worth a peep...
x

Definitely worth a peep, Rachel :)

I would say I'm probably worth a peep too Rachel and Rachel, but you should remember I'm massively biased :)

Hahaha - as well you're entitled to be, sir! A veritable Ken doll of self-assuredness (by the way, I think everyone believes the pic is of your Ken doll not mine:)

What a wonderful interview! And fashion advice too:-)

Oh yes, bring along your Ken doll and we'll kit him out in style befitting a literary great!

What about a literary gnat?