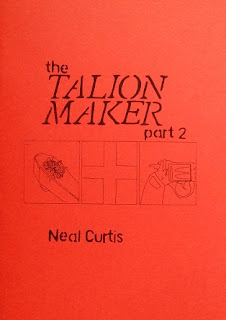 The Masque of Curtis

“I’ve been told I need to open up” reads the narration above the image of a box doing precisely that over the following four of six panels on page one of Neal Curtis’ The Talion Maker (Part One). In the final panel, the box is closed. The simplicity is striking. Page two introduces another metaphorical image: shards (glass?), which represent being told to “piece it all together”. The closed, empty box represents our protagonist, and the shards suggest we’re in for a fragmented narrative, but the effect is more like poetry than post-modernism.

Over the course of Part One, the shards motif is repeated, urging us to remember that opening request to piece it all together, to work like the ants depicted infiltrating a crack in the wall on page 12, a device which works particularly well where panels don’t follow on sequentially. Then another image is introduced, a porthole in a cell door, its circularity echoed by a smiley face, loo roll, toilet bowl, moon, sun; the images build like “sediment” into a musicality in the same way sonic echoes develop in poetry. And although the title tells us this is a revenge tragedy, there’s a reference to Shelley’s Ozymandias on page five that hints at Romantic quest with a capital R.

As Ozymandias begins in ruins, so does our narrator and his narrative, but we are guided to piece together the fragments in what is redolent of another Shelley poem, The Masque of Anarchy. That poem arose from the Peterloo Massacre, as one of the first documented examples of peaceful protest, though peaceful protest seems unlikely for our narrator when he reveals a gun.

Just as the allusions to poetry stack up, so do the references to conflicts: Che Guevara, Hitler, the Berlin Wall, 10 Downing Street, prisoners wearing jumpsuits and hood with their hands bound in the style of Isis captives, The Crucible (McCarthyism), Pop Idol. Yes, that’s right, Pop Idol. Because this isn’t just a story about large scale global issues, predominantly the refugee crisis, this is primarily a parable of British culture with a distinctly Brit-pop feel. It’s probably not accidental that the protagonist keeps his weapon in an Adidas shoe box. The latter detail and the panel lamenting “the last independent” bookshop tipping into bathos, but the contrasting levels, the small scale issues like bookshop closures intersected with globally recognised cultural threats, keeps the overall narrative’s feet on the ground and stops it becoming too far-fetched.

With Isis in mind, a reader interested in Shelley might now think of his poem “The Revolt of Islam” (1818). The epigraph on the first edition reads: “Hope is strong; Justice and Truth their winged child have found”. That poem followed the story of Laon and Cythna as they initiate a revolution against a despotic ruler. The reference may be a stretch, but thematically it’s a good fit. Both works are symbolic parables for revolutionary idealism.

The Talion Maker is at the time of this review incomplete, so it’s not possible to come to any meaningful conclusion, though Part Two continues in a similar format. Considering the opening, I would hope to see the protagonist breaking out of those restrictive square panels, and for the various backstory pieces to be brought together in a manner that makes their purpose definitive so that the events alluded to in Curtis’ work are brought cohesion in a work that looks set to do what hasn’t been done for Peterloo, and stand as a tangible memorial to what Britain has lost during times of poor leadership.
Posted by Rachel Fenton at 5:18 PM