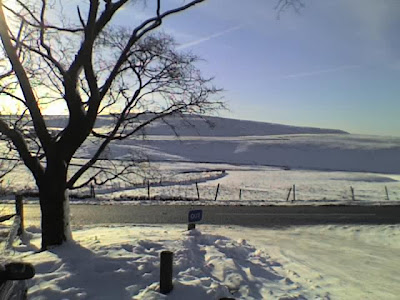 Snow: some flakes are big.
So, it's official, I am interviewing Women Rule Writer extraordinaire, Nuala Ní Chonchúir on September the 1st - plenty time to get those questions in (see last post) - and I'm really excited. I swing between nerves and giddiness (perhaps the giddiness is just the nerves making noise). And I have been thinking a lot about (everything - no change there) wanting to do a good job of the interview, because it's Nuala's good reputation, and it's mine too.

Some flakes are small.

Clicking onto my blog today I was suddenly hit by myself - as I must appear to you, out there.
I became uncomfortably conscious of my outward persona. There are two distinct impressions my blog gives.

Some melt before they hit the ground.

One can be summed up by the title of my blog, based on a poem I wrote about four years ago.

Every now and then I change the 'Death' to Nought, depending on my mood, and I switch the punctuation, too. I don't think it is a very 'good' poem, technically or otherwise, but it is a very me poem.

I read some interesting blogs recently and I was inspired to respond - one of them was about responsorial poetry, and the other was a poem which had me committing all kinds of errors, including this:

I looked at your
picture and thought
of the words. My jaw
seized till it ached with laughter. Snort
after snort, brought tears. Face: sore
and twitching; 'theose' I wrote, and 'ryme'.

I have noticed a tendency in myself to act spontaneously. I'm not sure it is always the right thing to do (especially in hindsight), but it is very me.

This blog is my first impression, in a way, to potential agents, publishers, fellow writers, and anyone else out there, in the ether, who cares to follow my ramblings - what does it say about me?

I still don't like the image of the snow - it looks like wallpaper, and might as well be yellow, and the background colour is just slightly the wrong shade of blue/almost grey, and my picture makes me look goofy and shy (which I am) but which I don't want to appear because I want to show my serious and thoughtful side (which I have), which is hidden by my humour, which is stupid.

Real snow is indescribable though, isn't it? You decide.
Posted by Rachel Fenton at 3:51 PM

My husband saw snow for the first time when he was 24. I keep trying to imagine how he felt, the first time. To me the first snow is always out of a dream. But the first, first one... He loved it, of course, but how exactly did he feel? Did it seem real?

Anyway, I love your poems. And I think the image you're creating online is just perfect. I am one who's too serious all the time and wishes she were able to let herself be a bit goofy. I think there are too many like me, and too few like you.

I loved both poems actually. I tend to do the same thing, very spontaneous, but that's the strength. I think I like both Nought. And Death. And good luck with the interview. That sounds thrilling! And unnerving too. But so neat!

I believe you can have coloured snow (at the poles), but I don't see what's wrong with the blog the way it is. It is inviting, says that you are well organised and capable of thinking deeply (not just lengthily!) about things and are creative. The poem is fine, by the way. I liked it a lot - but keep death as death, don't water it down to nought.

Snow?! Ah the other hemisphere always gets me mixed up! I'm getting cold just looking at all the snow.
I added another link to the dance video on my blog. I hope you get a chance to watch it!

Lori - I found that revelation astounding, it brought a lump to my throat. I've had to go away and think about it because I didn't want to say something, and boox it into words. What a beautiful thought. I think, as an adult, I apply the wonderment of childhood to the image of your husband; a superimposed naivity; a projection of some sort...but the emotion it conjours is really lovely - thank you for telling me that. I will hold that image dearly.

Shaylen - Thank you. The interview is all of those things, too! As for NZ, it is what you make of it. I used to dream about living here, from being 11 yrs old. Just remember, a place can't make you happy - that has to come from you, and you can be that anywhere - happiness is a frame of mind; and just as everynow and then it's good to change the pictures on the walls, it's good to have a mind shift, but think carefully about how much of what you want is really what you need.

Ok - I'm done with the philosophy now! :) But hey, if you like cold houses, by all means, come!

Dave - you are very perceptive, and your words are kind and tidy. Thank you. The poem was written with 'Death', and I shall 'be not proud' in exchanging my mood for what seems good! Got me thinking again...I enjoy your blog very much - though by the time I organise a feeling into a thought the moment to comment has passed!

Amber - I'll definitely watch your dance video - seems ants are working in place of broadband in my pc! So many crumbs!

The photo is actually one taken from the bottom of Mam Tor, in the Derbyshire Peak District - UK! It's a place that is very special to me. I chose the colours for my blog from it. There's a whole story tied up in this blog in various ways, nothing is without thought.

It's great that somewhere in the world the sun is always shining and it's nice and warm! I'm definitely a winter person though - but had to move to Auckland to discover that, lol!

Yes, the background is a bit wallpapery. I had no idea it was supposed to be snow. And you're right about the photo. It's also a bit on the small side so we don't really get to see you (which I know a lot of people are comfortable with – for goodness sake I've been using a painting of me for the last two years). I need to get a new photo up. I have to submit one to a site where I'm doing a review and everyone else has a real picture so that's a chore I'm not looking forward to. I usually just look annoyed in photos these days anyway.

As for the title of you blog, without the poem it's a bit confusing (or, depending on who you are, you might find it intriguing). I tend to think about blog titles the same way I think about the names of some bands, they don't need to make sense, they just need to capture your imagination. I like the top graphic though. You might want to reconsider the orange text – it doesn't really go with blue, does it?

I changed the colour of my blog when my first book came out. The sequel is out in a week or two so it'll be getting a colour change for that – I'm going blue this time.

A change, Jim, is definitely as good as a rest! I thought your picture was a blurred one you'd taken yourself with your mobile! Something about the position of your arm. First impressions, eh? I don't enjoy either the process of having my photograph taken or the finished result. Not for any vanity, I accept what I look like - I'm, by todays beauty standards, reasonably attractive, with a big goofy grin when I smile, and sad eyes. I might write a self portrait, and put that in place of my photo?

The top graphic's a picture of one of my paintings. Think I've said that before though... I know what you mean about blog titles. Personally, I like a bit of confusion/intrigue - not too much mind. And in the absence of a published book to market I chose the title of a poem I wrote which is in my first novel. The concept of the wall paper appeals to me... more than the finished result...everything's a work in progress I guess. Really appreciate your comments. Thanks:)

Hi Rachel,
What interesting, stimulating conversation from your comments. I like everything about your blog - your wallpaper, your photo, your painting, your beautiful poems, so there you go. What a delight. Very inspirational. And, oh, your interview, how amazing is that. I'm looking forward to the follow-up. :)

Hi AW - You always have such wonderfully positive comments. I was reading Lori's blog recently and you'd left her a really lovely comment. Glad you're enjoying the blog because yours is a favourite of mine, and I hope the interview is as interesting for all concerned as the intro!

I really like those poems! and I don't think you have too much to worry about in terms of the impression your blog makes - it's a good one to me!

Thank you Andrea, I really appreciate that, especially from you: as you know, your blog is one of my favourites. You always bring something really random (random is good to me!) to the table. Very individual!

It's a fine poem, but - if I may offer comment as a complete stranger wandering in from nowhere - I would stop short of either Death or Nought. Show, don't tell.

Sure, why don't you stay a while longer, I've just put the kettle on...

Make it a single malt and I'll pull up a chair...

I'm bone dry, P, but have a hobnob anyway.