A world in my here 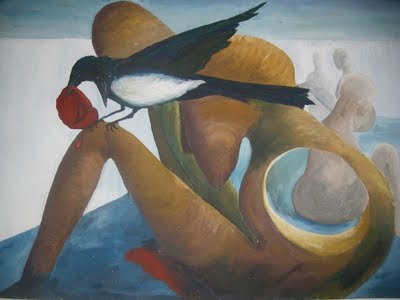 Disclaimer: the following is not a review of the Time Travellers Wife, nor is it a criticism of that book or it's author. It is merely a playful creative exercise.

Odysseus: I'm a modern day myth, part Icarus, part Cupid, part Orpheus, who, despite drinking as many cups of expensive coffee as I can fit into one narrative, and popping all the pills I can think of (which have or have not been invented), still cannot manage to stay in one place long enough to have more than a fight, rod someone, or to groom my future wife. This latter point is worth some discussion but as no one else is mentioning it I won't either, suffice to say, it's weird. I am a time traveller but I am caught within the confines of my own lifetime - a la Dr Sam Beckett. Unlike Beckett, however, I am playing out a different hypothetical time travel paradigm. One which has me land my naked tall dark and handsome butt at critical moments of mine or my wife's past, but rarely, in the future. I can take nothing that is not a part of me with me, except sometimes dirt, which I cannot explain, so I don't. It's all about being. There's something destinctly metaphysical about me that I cannot explain beyond quoting Donne.

Penelope: I have known Odysseus all my life, almost, from when I was six at least - any younger would have been weird. He is as familiar to me as perfectly cooked tuna at just the perfect shade of tuna pink. He has been visiting me in the meadow by my parents' house, Knossos. I am little more than a symbol myself but know I am a goddess to Odysseus because I often display the labrys. I don't like to talk about deep and meaningful things because Odysseus is the patriarch. I am the Frida Kahlo to his Diego, the Euridice to his Orpheus.

Odysseus: Penelope likes to believe we are living in a Minoan society but my values are strictly Achaean. I like to kick butt until I meet Penelope in my real time, when I mix the delights of butt kicking with the feminine delights of slipping between Laura Ashley sheets. I know they're Laura Ashley because I am cultured, obviously because I work at the Newberry library, and not Starbucks, where my persistent nakedness, coffee guzzling and product placement might have been more at home.

Odysseus: I am roaming around barefoot (and the rest - that is to say I am nude again, not to be confused with Nude the collection of short fiction by Nuala Ní Chonchúir, available to buy now from Salt) in some part of my neighbourhood, for maximum confusion and the threat of bumping into people I will know or meet in my future. I never can seem to time travel to anywhere else in America. I am an anti-hero striving towards redemption. Despite my time travelling gimmick with bells on (and one 'l' in traveling) I am still fallible and cannot shake off this mortal coil, no matter how many drugs I take. I am, in the words of Teddy Thompson, 'only a man'. Don't tell Penelope I listen this as she'll make me wear headphones (as I tell her to when she listens to Fleetwood Mac - das unt uncool, ya)!

Penelope: I make Odysseus wings, to remind you all that I am an artist actually and as an excuse to put in some technical detail to make my career choice sound real and not made up to justify this one scene. Odysseus is at the mercy of the Fates, however, and even my wings cannot save him, now that his feet have fallen off (oh, sorry, was that part rushed? Only I thought, seeing as the book's all about me really, you'd like to spend a huge amount of time on my wedding day. Odysseus won't mind, he can time travel over this bit, again and again).

Odysseus: Sometimes I get really quite rather very annoyed that people think that I'm just a sci-fi character, but that's not true. If they hadn't thought up a condition to try to explain my time travelling ability I would have been a magic realist romance (so much to thank Borges for), perhaps, but I really am not a sci-fi character at all, that's all a myth. However, giving me a toe hole into that genre does improve my sales. Sci-fi fans seem not to care about the other elements of my make up: hearing them go on and on about how science fiction writers invented this that and the other is like hearing Penelope go on and on about tuna. It's all a myth. I keep travelling back to that same sentence, probably because it is of great significance to me in my life, even though I may never understand why, not even if I look it up in my big Random House dictionary or read all of Ovid.

Penelope: Some might say my life is a cliché, or that some of the characters and racial stereotypes are clichéd, too.

Odysseus: Some people may not be able to discern a difference in the narrative voices of Penelope or I.

Penelope: Some people may have to refer back to the name at the beginning of each passage to remind themselves which character is speaking as it is not always clear from the actions being shown in the narrative - unless there is a quantity of nakedness, or tuna at hand - especially as both Odysseus and I have a fondness for Laura Ashley.

Odysseus: It's all because I practically live at the library. If I didn't, I probably wouldn't feel the need to drop in literary references every five minutes.
"And you wait, keep waiting for that one thing which would infinitely enrich your life: the powerful, uniquely uncommon, the awakening of dormant stones, depths that would reveal you to yourself. In the dusk you notice the book shelves with their volumes in gold and in brown; and you think of far lands you journeyed, of pictures and of shimmering gowns worn by women you conquered and lost. And it comes to you all of a sudden: That was it! And you arise, for you are aware of a year in your distant past with its fears and events and prayers". - Rainer Maria Rilke.

Odysseus: I could go on and on, but that would be epic.

Penelope: Odysseus goes on and on, but I should have the last word, after all I am his wife and this is all about me.
Posted by Rachel Fenton at 3:56 AM

I forgot to say that I'm really glad I came across your blog too - it has become a favourite :) I found this post very amusing. I'll be interested to read some of your fiction one day.

Thanks - hope this will tide you over!

I knew you were talented. I enjoyed this - very imaginative. I haven't read the Time Travellers Wife even though it has been sitting in my bookshelf for over a year now. I do plan to read it at some point. Look forward to more of your playful creative exercises... :)

Oh, do read it - it's a quick read, despite its size! Contrary to what impression my post may give, I actually enjoyed it very much! Parody is the greatest form of compliment after all :)

Prowling around here from across the Tasman - so glad you stopped by to visit me because I have found you too!

Now I have more than six blogs to visit, hurrah! :)

I might read The Time Traveler's Wife on the strength of this 'unreview' alone. You clearly have a sharp eye for other people's writing and a sense of fun. I hope you make it as a writer if ony to prevent you from becoming a scary reviewer of children's books;-)

Thanks Thomas, that's such a great compliment! ( think ;)

Bravo. How long it must have taken you to write this flattering parody, I can only guess.

One which has me land my naked tall dark and handsome butt at critical moments of mine or my wife's past, but rarely, in the future.

I adore this novel.

Ok, so it is about the Time Traveler's wife, not the Iliad? Oh, I must confess to a lot of stupidity that doesn't allow me to decipher your writing very well.

I kept thinking: did Odysseus really travel in time? I thought he only traveled on the sea. Then I was thinking: but that guy was Ulysses, in the Iliad. So who's Odysseus and why is he married to the same Penelope? This is what happens when you know half things about everything.

Now after some Google and Wikipedia investigations, I am starting to get it (I also read the Time Traveler's Wife and loved it quite a bit at the time) and it's funny and smart and I love it.

I look forward to reading more of your writing.

Is that one of your paintings, by the way? Intriguing and elegant yet strangely brutal. I like it.

Donna - glad you like it! Took surprisingly little time - first I time travelled into next week, gathered all my thoughts and time travelled back to Friday, two days before I finished reading the book in real time, to type everything up in time for Sunday, by which time I had finished the book! (A couple of hours on Sunday is the truth).

Lori - Mythology provided a frame work only, made it creative for me - not meant to confuse! And, again, I love the book, too! I suppose I was deconstructing it to stop me blubbing for hours after I read it!

Thomas - glad I have a new fan!
The painting is one I did about ten years ago. The one I use as my page header is my most recent 'finished' painting. Thanks for the compliment - it is quietly gruesome. I hadn't looked at it for some time until I wrote this post, dug it out especially!

And Lori - just realised your compliment at the end of your comment was for my post, and not TTW! Lol! Thank you so much! See, I can deconstruct - I just can't read!

Really liked this, and laughed! Now blown away to find you do the art too. Enjoyed myself here.

Thanks, you've been very well behaved! Do come back soon!

Rachel! Thank you so much for your nice words on my blog. I really really appreciate it. It made my smile and my day is 10x better because of it. Thank you!