Glad I wait or not? 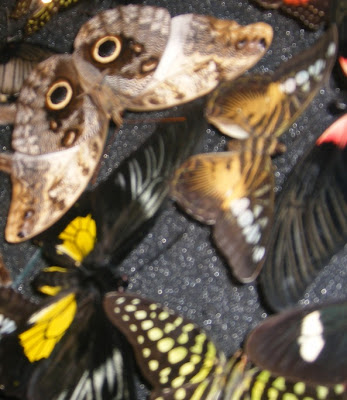 Last post I used this image. I didn't give you the full picture.

Todays post is bigger than I wanted it to be.

Have you ever had one of those dreams where it seems really, well, real? And then you wake up, at least you think you have, and realise that the dream hasn't ended? And then, hopefully, in the real world and not in some straight to tv horror film, you actually wake up. Phewsh! What a nightmare!

There's nothing worse than doing battle in your dreams only to wake and have to do it all again - and you ever realise how rubbish you are at fighting in dreams? All that pre-experience doesn't do you any good whatsoever because, when the real event happens, all you know how to do is lose - that or wake up, and you can't wake up again if you're already awake.

Well today I woke up...hang on, first things first. Remember that poem I was writing about bugs? Well, I had another bash at it (oh, pardon the pun - I don't often bash the wee beasties, not often, thankfully...for me...). Here's what I have so far, not a draft as such, more a collection of associated phrases indicating something of the movement and imagery I'm interested in pursuing, or was when I wrote it:
Un-homely.

There are three in jars on the sill: insects.
You'd have to hear them to know what they are.
Mute: I have captured their identity
but the fear they infect me with cannot be kept
or even held. Reduced to a pencil tap I collect
their facts, memorise their features through that
which is featureless. You can see
their difference more clearly through the safety
of a jar. They have travelled the equivalent
of miles around a glossy ellipse: each one slips
as it tries to scale the side, all those legs and not
one can get a footing. I've never liked them
and to think I came all this way to find a fear
with features I recognise only by my reaction to them.
Window ajar: I return them outside, lesson learnt,
to butt noisily against the pane (still
ignorant of my sensitivity), or silently wander.

I used Jim's starting point and went from there. What I was aware of, as I wrote this, was that there were several things going on in my thoughts and that it was the clash of these which was one cause in my poem's non-communication. Firstly there was the noise. The first poem I posted was entitled "Cicadas": it isn't merely their buggyness which frightens me, it's their noise, and for several months of the year it is constant through the day. However, at night we have crickets - similar you would think? Yes and no. I like crickets. I can hold crickets in my hand, if I'm feeling brave. I like their sound. I detest cicadas. At some point I'm going to work on the cicadas alone.

Secondly, there was the feeling of alieness - not only of the bugs being alien, but of my feeling alienated in a place where these bugs are at home. I wanted to capture (oops) the feeling I had, often still have, of being not-at-home: an un-homely feeling. This in turn leads on to ideas around heimlich and un-heimlich and touches on the gothic, the surreal and the notion of things which are all too familiar being at the same time most frightening. I want to write a poem with these elements in.

Finally, there is the realisation that different senses react differently to different aspects of buggyness. There's a lot of difference. Certainly it all results in the same fear but the individual elements deserve distinction.

I woke up with the breeze from the open bedroom window blowing my hair across my cheek. It was just a dream, phewsh, here I am in my own bed with a gentle breeze to cool my perspiring brow. I sat up. My hair was still blowing the same way, only the window wasn't open.
Back a bit. I had gone to bed after checking my blog (for what, blog bugs?) and drifted off into a fitful sleep. I had a dream about a hairy spider - specifically a hairy spider in the bathroom which someone (my husband?) flicked into my face.
I woke up and felt a sense of calm rationality sweep over me when I thought of the last image I had observed closely: 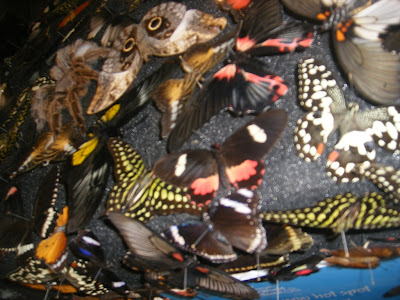 The moth "eyes" - and I laughed at how funny it was that I had cropped off the part which scared me - see the little furry critter in the left hand corner ("LITTLE" USED HERE TO SHRINK FEAR TO MANAGEABLE PROPORTIONS).

I looked at my husband who was looking at me and I saw an expression register on his face which I felt ought to have been on mine. Especially considering the fact that my hair was still travelling towards my eye.

A flush of adrenaline had me flick my hair from my face. I felt nothing. I saw nothing. I did the thing they do in horror films when you shout "NOOOOOOOOOOoooooo"!

I peered over the edge of the bed and saw:

which one did I pick? Go on, click the link - I dare you.

I want to say that I rushed to grab my trusty bug hoover and carefully disposed of this fellow to hoover up some spiders of its own (white tails are unusual in that they only prey on other spiders - veritable gladiators of the bug world).

P.S. Sleep tight, mind the bugs don't bite! Oh, and the scale...it's all wrong, the one on my head was much bigger, about five centimeters across, bigger than my eye in any case, or in my head!

Short story newsflash - there's a competition over at the Tomlit blog if you're interested. Get your entries in quick though, deadline is December 14! Think I'm going to enter.

Posted by Rachel Fenton at 1:16 PM

Good luck with the Tomlit comp. I think a reunion between a certain Mr DeTamble and a Santa South Park writer may provide inspiration!!

Lol, Donna - can you imagine?

"Am I to take it there will be no side dishes with this frozen waffle? Well, time travel and get me some now!"

Henry: I'm standing in a meadow from your childhood, tall, dark and butt naked, what do you want me to do?

I like this - it's true that it is often the most familiar things which can be frightening. Films like The Birds and The Day of the Triffords are more terrifying than some out of space, unreal thing. The natural can be truly strange.

The surreal and the gothic are areas of interest for me too, I'll be interested to see what you do with them!

Even once I knew where it was going, it still made me break out in a cold sweat. Spiders OK if small, or from a great distance. Big, and facially exploring, is, quite simply, the stuff of nightmare. I suspect my heart would have stopped, so I congratulate you on still being with us.

Like the progress on the insect-jar piece - particularly the last three lines.

Anything that crunches when you crush it cannot be good.

I have yet to watch anything which can scare me as much as I can scare myself, Andrea!

I have the curse/blessing of very vivd dreams on a regular basis - literally the same week every month - and so the surreal/fear is a big part of my night life!

I am very fond of gothic literature and have written a few pieces in this genre. I'll see what happens with this poem...need to let it stew a while now...need to stop posting this bug picture, too! And late night comments!

Titus - I cried after I got it off me! Makes me shudder everytime I think about it (a lot). Thanks!

Re: poem - yes, I feel it's heading in the right direction even if it hasn't really taken shape just yet...not worrying about this at least!

We only have 2 poisonous spiders in the US - brown recluse and black widow, so the others, being harmless, don't bother me much. But with the amount of time I spend gardening, on my hand and knees, leaning into flower beds, coming face to face with an alligator lizard always gives me a wild startle!

Yes, that was Santa's real beard and hair. One thing I failed to mention was that instead of being accompanied by an elf, he had an event planner type with a clipboard - very odd!

Rachel, that scared the heck out of me, I was frightened to scroll down the page and I'm still all goosebumps....uuurgh!

3- stopped associating with a few negative people in my life

But I have book writing friends that do it on purpose because they get tons of GREAT material to write about.


I love reading your blog as usual

GW - thanks for the Santa update, lol! You have to give him some credit for authentic whiskers!

I'd much prefer alligator lizards to spiders! I'm not scared of little/medium lizards - they have adequate legs - but only two poisonous spiders! Lucky you! I've temporarily given up gardening!


Penny, I did think of you as I typed it but I don't think reading it is half as scary as the real deal, only I wouldn't wish that on anyone!

Hey, Tom, good to have you here! Yes, I do see the positive side of all of this - if only for the writing I derrive from it! I might try your list when I want a good sleep!

Thanks to you all for your comments!

ROTFL. It's a winner!

Congrats in advance - you're bound to win. I shall not bother. I can't compete with that!

Dave, I have read some of the other entrants' writing - I doubt I'll win - especially considering the story I entered: it's not to everyones taste. I thank you for your vote of confidence. The comp is fo 500 words or less on the subject of reunion - go on, have a go!