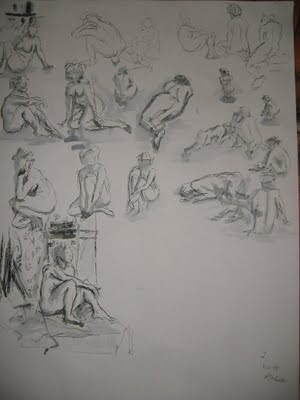 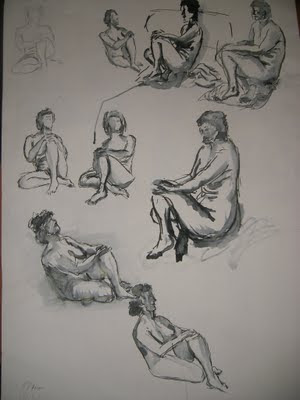 I found a stack of sketches, all near identical, each figure having taken mere moments to translate. I like the messiness of the whole thing. All of it. Everything. Life. Don't tidy me; don't edit me into conformity and I can be deliciously succinct.


Give me an old body any day
with breasts comfy as cats, skin
that wants to touch itself.
Young bodies are regular, angular or thin,

each appendage trying to leap,
perpendicular, as far away from its host; each
bump a fleshy beast as obstructive,
as appealing, as short-shelved as a peach.

Not long to go now until Nuala Ní Chonchúir touches down, on the first of September, to talk about her ravishing book of short fiction, Nude. And now I want to congratulate her on her genius for choosing a title that would make headlines this week for being in a tug of war between two celebrities - what great publicity! - And she isn't even married to Henry DeTamble!
I'm still averaging a short story a day, too. Got that collection collected! Now, what to do with it?

Posted by Rachel Fenton at 8:36 PM

And she isn't even married to Henry DeTamble!

LOLOL - your entries seriously kill me!

Glad to be of service Donna! I live to amuse!

I will, after paws for thought, give it a go! All I have to do now is find somewhere to send the darn things! Thanks for the suppawt!

Thanks for the newsclip on EU trademark on Nude all caps. Have changed a title post on my blog and added a ps with credits.

Glad to hear the writing is still going well too. All the best with the upcoming book launch too :)

Merc - I would say, don't worry about it, but you never know, eh? Bonkers really. Nuala has it all lower case on the book so I suppose I should type it that way on the blog, too, then there's no chance of treading on patent shoes!

Cheers me dears, Andrea. Am just about to pop over and see your blog! Great minds...ahem...

First of all I have to say that I love those sketches. I am just in awe of so much talent in you.

And the poem, is that yours? It's amazing. "Skin that wants to touch itself"? Wow. Beautiful.

You should stop posting all this stuff before you end up making us all feel embarrassed with ourselves and our minuscule attempts.

Lori - I shall endevour to be less of a boaster! I apologise. Mostly my posting it is a way of putting a little pressure on myself to keep going - I am all or nothing! Just pleased this little spell is lasting as it is.

The sketches are old and I don't actually have much in the way of talent - more enthusiasm, but I think it shows that I enjoy making pictures! And I thank you sincerely for your kind words and compliments!

The poem fits better with the last nude I posted, the pastel one, but I figured a nude is a nude, right?
It came out of thinking about how much more interesting to draw older life models are, and how relaxed older people are in their skin. There's an uncomfortableness about nudity in youth: it's either sexual or shameful, which is a shame because bodies are beautiful in nature as well as art. Don't worry though, you won't see me going down to my supermarket a la nude! I like layering! :)

Lovely sketches. And the poem reminded me of a model I used to draws -- an elderly Canadian with a body like a weathered walnut tree. so much for the pencil to do!

Thomas, welcome back, you've just reminded me of a short story I wrote ages ago...I'm going to post it with a picture of a tree. I like things which emplore you to really look, not merely observe, to build the thing in your mind and replicate it on paper from the pencil up.

Love the poem and pics.
What a bonkers lady Ali is (Bono rubbing off on her?). I've been waiting for her irate phonecall seeing as how she 'owns' the word and all. Silly silly silly.
Can't wait to stop by!!

I wonder what the most lucrative word to own is? I must invest! I think life must get a bit crazy when you own everything there is to own, you start wanting to buy clouds and stuff...I would... :)