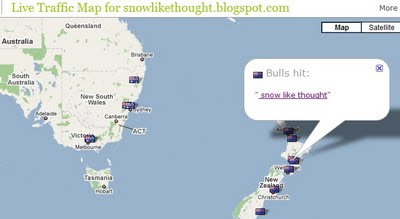 Live traffic...you mean there's, erm, non-live traffic? Err, that would be stationary in a never to move again traffic way, as in permanently parked traffic; on the scrap heap! Recycle: it's alright after all! Lost the plot some days ago, before my sleeping hours were reduced by a small persuasive chap - that's not a euphemism, by the way - with mighty lungs and an ability to throw his toys out of his cot!

The internet - a world of mischief and ideas.

I have a poem to post today but as I was rooting around in my pictures for a suitable image - I know how you bloggers like a picture with your post - I came across this, which I had saved a couple of months ago, and thought I'd give a big high five to my blog readers in Bulls, and a thank you for making me chuckle. Yes - I'm immature, what of it?

Inspiration, it's everywhere, especially in these times when it's no more than a click away. It would be possible to sit here and never leave the knowledge well that is the internet. Sitting in front of a screen for hours on end is not the way I find inspiration, however, even if it is the medium which transforms my findings most quickly into stories and poems. I still like to get out and about, hence blog AWOL lately.

Come on let's go
I'll say and I'll
scoop up your two toothed, grinning,
compliant softness and we'll head
out into civilisation. Note book in hand,
we'll listen to random snippets of stranger
conversation you don't yet understand,
and notice peculiarities of description
to translate into language; and when
the notebook is heavy with
inspiration and my arms are tired
from carrying you, we will return,
and as you sleep I'll write,
and one day you'll be inspired.


If you want some more inspiration, Women Rule Writer is hosting a blogeriffic interview with poet Liz Gallagher where Liz talks about her collection of poetry "The Wrong Miracle", and where Nuala invites you to enter a draw to win the book. But if you prefer to buy your own, all royalties go to SANDS, the stillbirth and neo-natal death charity. So it's a win win situation. What are you waiting for? Check it out.
Posted by Rachel Fenton at 12:08 PM

Stupid question of the day: how does one write poetry?

There is such a wonderful symmetry to your poems; you seem to know exactly what you are doing. I could try that, and it would come out as "there was an old man from Kentucket!"

No such thing as a stupind question, Donna! In answer....erm...I dunno, I'll let you know when I find out! Most of mine really suck, if I'm honest..have hundreds that I tuck away and hope to goodness no one ever EVER sees them...though, the cringe making could be good anti-wrinkle exercise for me!

I think the compulsion to write poetry either is or is not in you...whether the resulting poetry is poetry by anyone else's standards is another matter!

I faffed around with the lines so much wondering whether to make more of those repetitions, Titus, I don't think it will ever feel finished!

Anyone for line four?

I like your poems, but I agree about having piles of them that I hope nobody sees - shame I have some of them posted on my blog - ha ha ;) I agree about the internet in a way too, it can provide a lot of great inspiration, good old wikipedia etc but it's also great to get out and about, talk to people, discover real books and treasures! I think I'd find it difficult to write full time.

Compliant softness works for me - loose, passive, like a jellyfish but much more beautiful.

Gorgeous poem. Very apt for me right now - I'm feeling info overload from blogging and Facebook and I want to break free! (To quote Freddie M.)
Anyway, I walked as far as the swimming pool on Friday with the baby, to see my middle child swim with school, and got te guts of 3 haiku and a longer poem along the way!! Oh my God, I SO need to get out of this house more!
p.s. thanks for the mention!

Thanks, Andrea - I am contemplating deleting every past post now! Ha!

I think a lot of "writing" is actually thinking and listening and thinking and looking and...etc
It's probably sensible not to give up the day job...I am not resting my laptop on a big pile of dosh, that's for sure! I like to mix things up a bit....have a bunch of things on the go...and popping out and getting about really can be just the ticket to getting that piece of dialogue or missing plot...now if I could just find the plot I lost....

Thanks, Elisabeth, I wanted to find a way to describe that malleability and trust but in a more loving way, and "loose, passive beautiful jellyfish" is a good way of describing just that!

Hey, Nuala, no probs re the big up - any time! Ha! I know exactly the overload you're on about (minus facebook), I have had to just blog less and let my brain get an airing, else it felt like I was going to implode or something (probably less dramatic but more damaging)...great to hear you're getting some quality mumming done (I hate the phrase quality time though...hmn)...and some good bone structure. Everything I type tonight sounds like utter tosh - apologies...but with the walking, before I had Reuben I walked the school run (all six miles a day of it) and almost every week had me a poem - it's great for stock piling! Now all I have to do is go through and sort them all out!

I seem to be drifting back towards prose as the poetry voice is entirely silent at present. Off to Amazon for a little practical assistance via this book! Dick

(I/blogger managed to lose your comment, Dick, so I cut and pasted you off my email! - for any visitors, Dick's blog link is on my roll, over there on the right :)

But if the words are flowing, does it matter whether they're prose or poetry, Dick? And some of my best peoms/prose started off the t'other way round.

A lovely poem, as ever.

It's so easy to write bad serious poetry, which is why I mostly hide in comic verse. Talking of which, where did you get to with that limerick?

There was an old man from Kentucket
Who tripped over a rusty old bucket
He fell to the ground
and his turban unwound
?

There are zillions of clean L5s

Very inspiring your inspiration, Rachel. I always find that I have to be by myself, in complete solitude, to reach the place. I do well by myself with the computer. Sometimes. Rarely. Barely.

Or seriously bad poetry, in my case, Thomas! Haha!

We could do a collected blog of limerics!! What d'you think? ;)

Lori, is solitude the place where you get the most inspiration or just the most writing? I need solitude to write and, increasingly (must be age related) to think, but I can get the initial ideas/inspiration anywhere. Had lots of great ideas on the school run and, pre Reuben, I hung out downtown to meet my HOM for lunch and watch the city go by. But, whatever works, works, and if solitude does the trick for you, go with it!

hi rachel - nice "hit" - no bull. nice poem - ditto my first sentence. i wish there was some way you could share how you think as you write and then especially as you rewrite and then most especially as you know that one poem is good while the others drift into boxes and envelopes, drawers, binders, wherever . . . . . have a lovely day. steven

Hey, Steven, glad you like. I am planning to try and reveal the process behind one story of mine, in a few weeks (after it goes on the website I submitted it to), but now you have suggested it, I'll try and do a post about poetry...it's a tricky one (to do without boring you to tears) but I'll give it a go. Thanks.

Thanks for the mention. ; )

And like the poem and the ensuing comments...lots of food for thought here...cheers, Liz

Hey, no probs and thanks for calling in, Liz. I haven't won anything since the small tin of dried up spaghetti in the school tombola - I won't get my hopes up!

Pleased to be providing mind fodder!

I LOVE the poem, and as usual am overwhelmed by all you talented wordsmiths. My only contribution is to be an avid reader!(Well somebody's got to do it!)